by admin April 27, 2020
In our newspaper there is a running tally as to how many days since spectator sports shut down, and today the number is 45. Seems like longer doesn't it? Just think 45 sunrises, and sunsets, since things began taking a turn for the worse. The good news is that in Orange County things are actually taking a turn for the better, or at least that is how things seemingly stand as I type.

Yet still, we are all really in the dark as to what is next, aren't we? It's kind of scary on so many fronts. It was also reported that the law enforcement offices are expecting more calls for suicide attempts which probably comes as no surprise, what with so many people already living from paycheck to paycheck. Not to mention, domestic abuse worries. Or, for that matter, child abuse worries. For a generally optimistic person, it is hard to maintain that attitude but I'm trying!!

I began a new puzzle the other day, one that was actually purchased for Matt and Tom and had just not found its way to the post office. Double sided, it looked pretty hard to me which is perfect for them. I've not gotten very far. 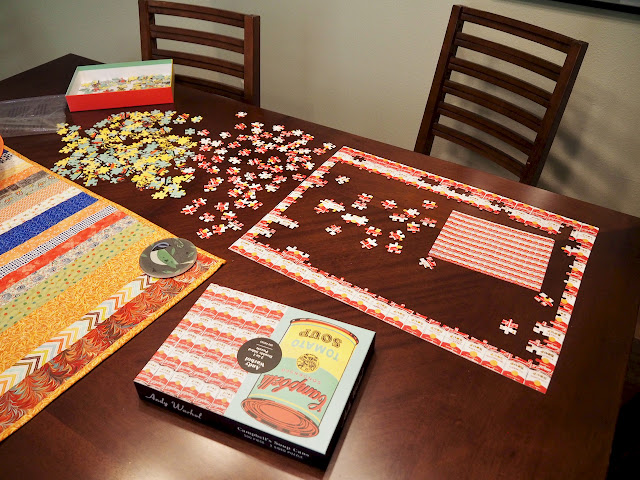 The truth is, I was hoping to do another puzzle, a good way to spend the afternoon hours, so I went to Target, imagining I might find something there that was good for a beginner. Fat chance. 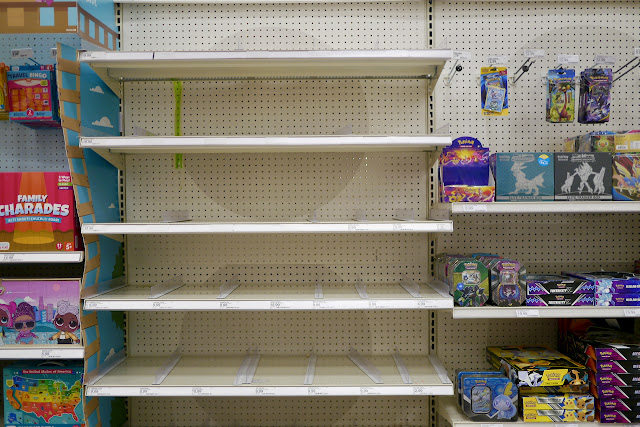 In other out and about news, we drove over to Bill and Fallon's house to deliver some cookies and holy cow, the price of gas! 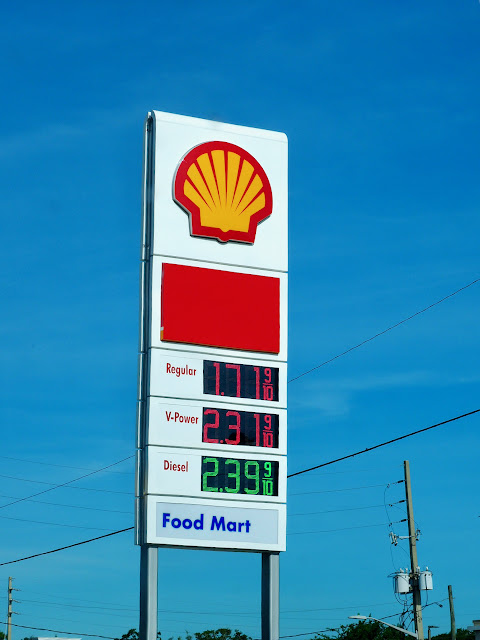 This is one that won't be believed in a few years, or so I suspect. Of course no one is driving anywhere, so it really matters little, right?

One day last week, rather than go to Lake Davis for a walk, I suggested we go to Lake Eola and see what was what. Remember how I said about going to a public park and social distancing? Most of the time it was just fine, but there are some folks who just don't seem to get it. Not to be ageist or anything, however it seemed to be mostly young folks on their phone. Nevertheless, it was a lovely day for a walk. 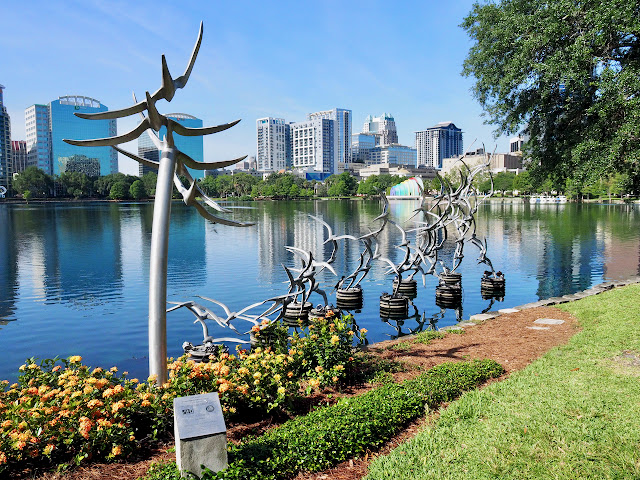 There were quite a few swans on nests, while others were taking a break, allowing a view to their eggs. Pretty darn big aren't they? Plus, all the nest building materials! 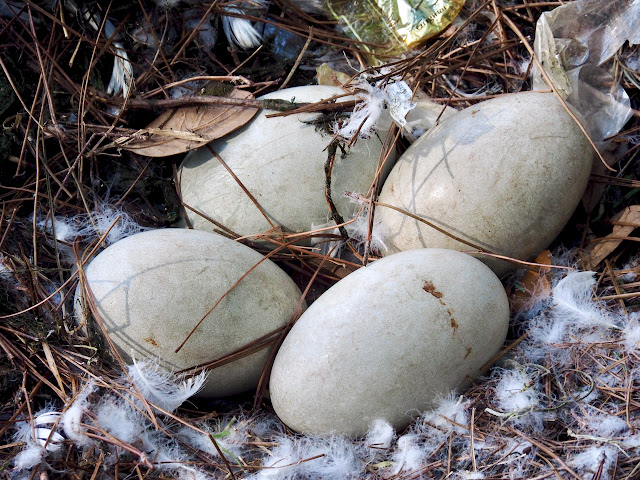 Before leaving downtown we dropped by the County Administration building to check out the latest sculpture installation. 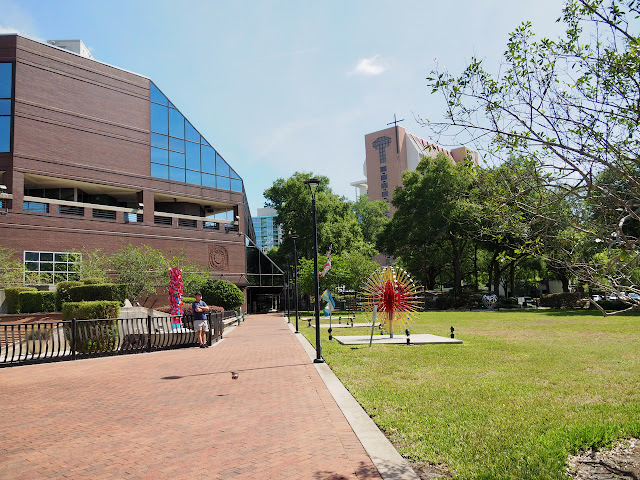 Bruce is standing beside a Dorothy Gillespie sculpture, an artist some will remember from the parking garage across the street where there is a colorful one hanging down through all five floors. This sculpture was crazy creative, and I mean that in both ways--very crazy, but clever. 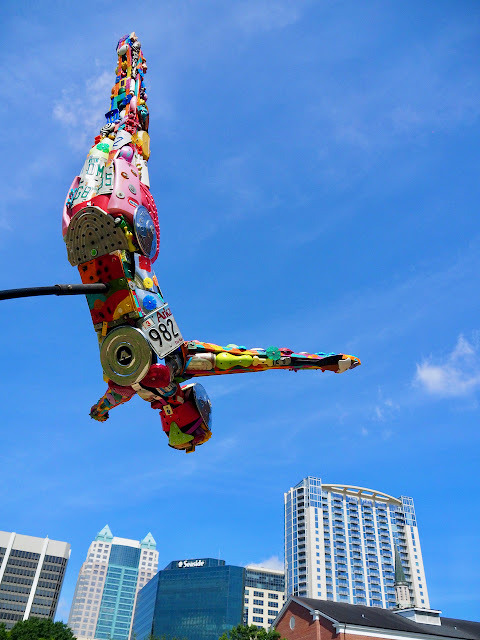 There are all manner of everyday objects stuffed in, including dog bones, knives, and Matchbox cars. Did I ever tell you that they were created in Hackney and Matt took us to the museum there? Very interesting.

Another day we went on a long bike ride through the nearby streets, stopping in a tiny park on Lake Hourglass near our friend Lynn's place. Seriously tiny, there were but ourselves, and a young father with two small children. There is a small dock and pathway set amongst two small lakes. What a wonderful surprise to come across this: 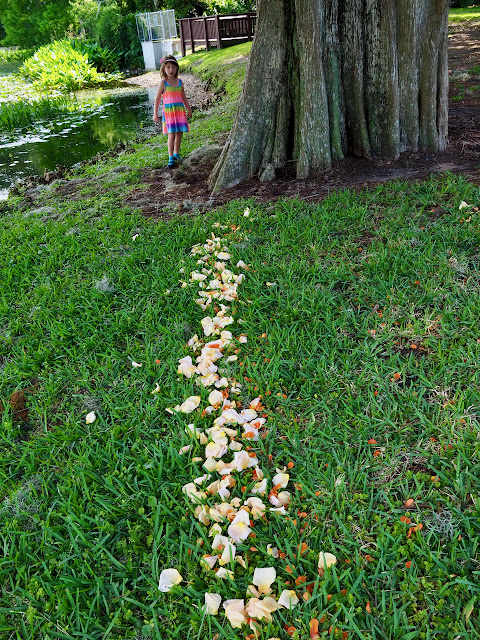 When the little girl saw it she squealed with delight, especially when asked by her father if she thought it was done by fairies! I'll say one thing about this pandemic, folks are getting very creative. I've seen where stores in downtown Vancouver have been boarded up, the plywood brightened up by colorful murals painted by local artists. I talked to a friend today who told me she's learning to paint by watching Youtube videos. I've probably mentioned that Facebook group for birdwatchers in isolation who are posting the most beautiful photographs of birds in their garden, primarily in England. Not just photographs, but whoa Nelly, are there some talented drawers in that group! Another facebook group I've been introduced to is called, "A View from my Window" wherein people post photos from around the world, looking out their window. That group, my friends, is fantastic. Speaking of a view, on March 4th, I wrote a post entitled, A Room with a View which is pretty crazy. It was also the last post before the, pardon the expression, shit hit the fan. As I was going back in time, I realized that something has gone amiss on my blog, so if you go do the same, reading anything after that date, many of the embedded photos are missing, replaced with a symbol like, no entrance which is highly disappointing and something I only discovered by accident. Anyway, apparently it is a Google problem that they are trying to fix, or so that is what my search told me.

On that same bike ride, I also saw on a power line, a Great Crested Flycatcher, quite the mouthful for such a small bird. Their photo (link) is infinitely better than mine. Then, I saw a lovely Wood Thrush. It was a good day for bird enthusiasts! 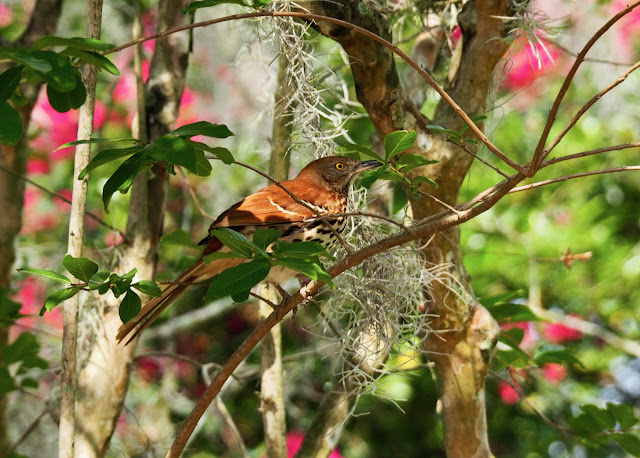 As well, it was a good day to see a new flowering tree that looks a lot like a Schefflera, maybe in the same family? A new bloom to me. 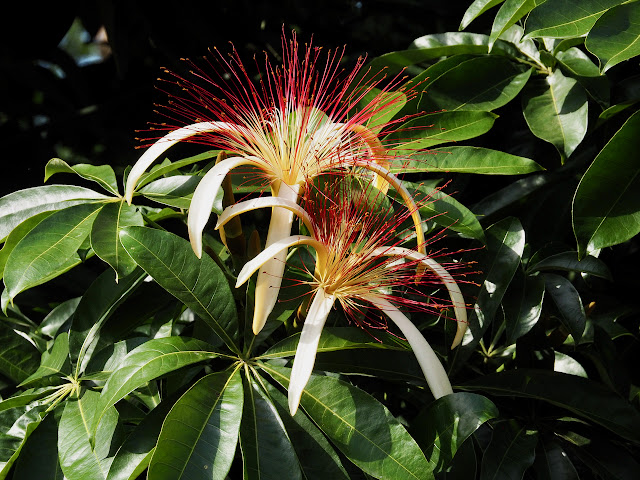 On my way to check on the little Carolina Wren in her nest hole, 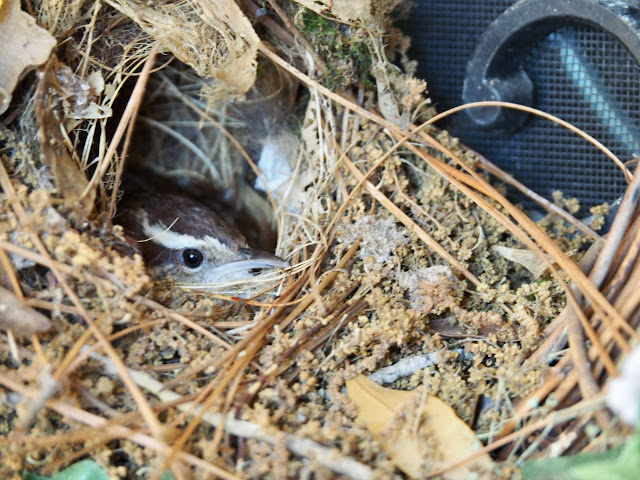 I saw some lovely colorful annuals which brightened my day even further. 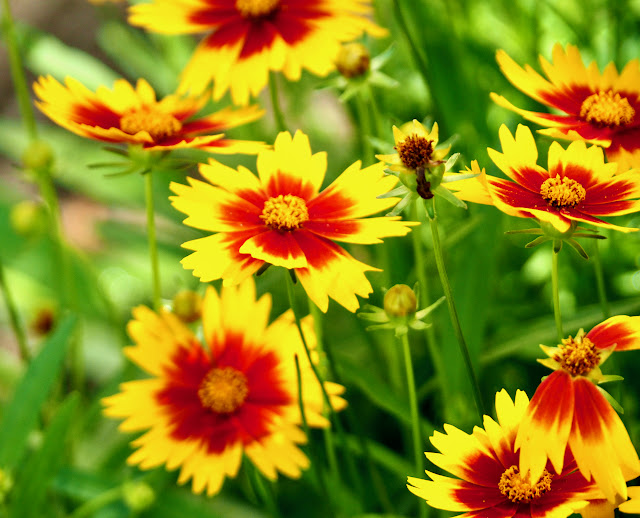 Perhaps you are wondering how Bruce is handling this shut down? Well, he's learning what it is like to be retired, that's for sure. Some folks were worried how he would adjust to retirement, having worked 80 hours a week for so many years, and so was I, but he filled loads of time working for free, which suited him beautifully. Now, if we still lived in our home, with his big workshop, things would have been different....he'd have finally gotten to use those tools! But life took a turn, and here we are. So, how is he filling his days? Making me play pickleball with him, that's how! And it is already blistering hot, even early in the morning! We are getting marginally better, so when the day comes that we can, once again, play with friends, hopefully we will have improved. There are advantages to living in a condo, don't get me wrong, just not enough work to do. Which is partly the point, right?

I, like most of you, have been spending a lot of time in the kitchen and not just on baking. One night I made Thai Noodle salad, a recipe I'd used once before. Was it worth using 18 ingredients? I think so. 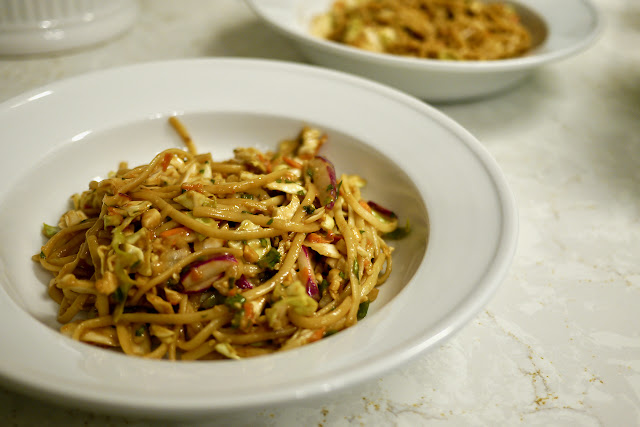 Another night I made pizza, and still another night I made a new recipe called Green Rice. Essentially, it is rice made with a ton of green stuff I'd put in the food processor, including parsley, cilantro, poblano peppers, jalapeno, green onions, and anything else I could find in the produce drawer. Just kidding on that last part! Crispy chicken and delicious sliced tomatoes from Clemons rounded out our meal. 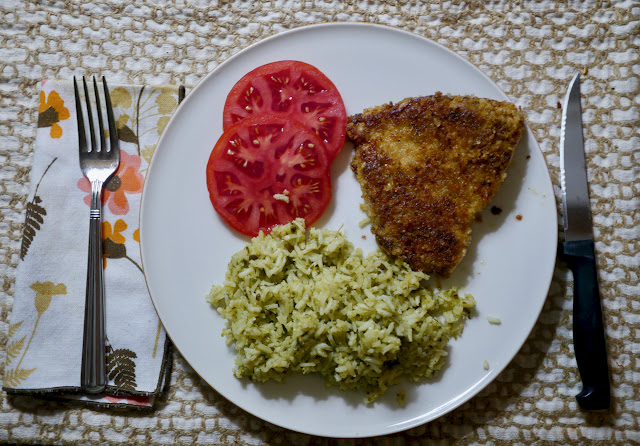 One rainy morning, I went to check on the ducklings, and of all things, they began following me up to the back door! Aren't they huge? 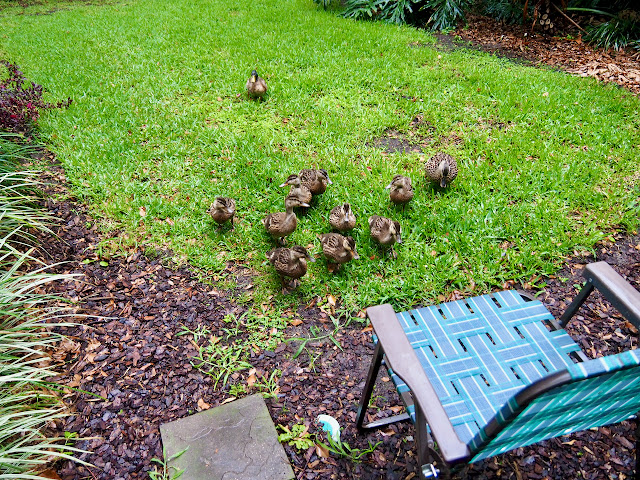 And yes, it has finally rained!!

Have you seen any of the new television commercials that include Covid-19? I'm having a hard time figuring out how they were made, what with social distancing and all. Speaking of social distancing, there is another new word usage going around...zooming. And we all just thought it meant moving quickly!

The time has finally come for me to get a new smartphone. And the good news for me is that they are just putting out an iPhone that is very similar to my current model, an iPhone 5s, with a home button and about the same size! On April 25 I received an email from Apple saying the phone had shipped and would arrive on May 5. I've waited this long, what's another 10 days, right?

After a mostly hot and humid weekend, another week of quarantine came to an end, and today we start a new week, knowing almost nothing about what the future holds. There are so many people suffering, either mentally, financially, or with their health, it almost doesn't seem fair that we get to enjoy our surroundings, yet we do, with enormous gratitude. 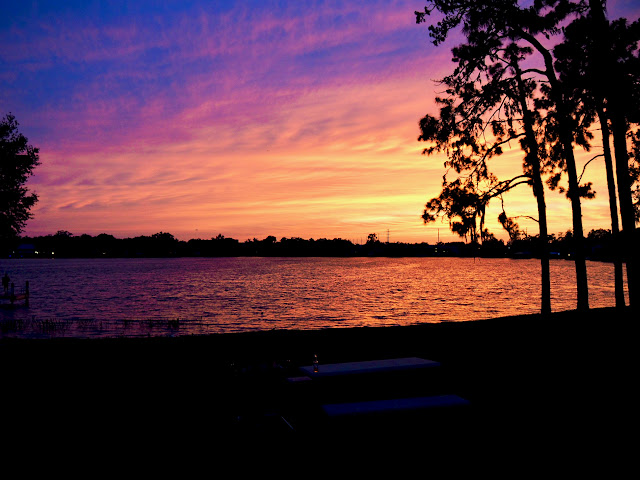 And so we look forward to light at the end of the tunnel....