My Detroit Novel Was Shelved Until the Millennials Came

People are always asking me in a bemused way, Why do you always write about Detroit? I’m sure they don’t mean to sound condescending, but sometimes I can’t help but to take it that way. Maybe it’s just my imagination, but it always sounds a little like, Why are you still there?

In their defense, I do always write about Detroit. All my books have taken place here except for one, The Leisure Seeker, and even in that road novel, Detroit is writ large because the main characters live there. (In the film version they come from Boston, but don’t get me started on that.)

The fact is, I’ve lived around here my entire life and it’s what made me a writer. Detroit’s always been a good place to make things and not just cars. Detroit is not generally thought of as a creative place, but we are overflowing with poets, writers, artists, musicians, filmmakers, rappers, sculptors, DJs, painters, potters, you name it. The creative community here is amazing. I’m very proud to be a part of it.

Twelve years ago, I decided to write about that creative side of Detroit. I set out to write a comedy of manners in the vein of Dawn Powell’s New York novels. She often based her characters on her circle of creative friends in 1940s-50s New York City. The books are timelessly funny, but they’re also so good at evoking their period. I wanted to write something like that of my time, my generation, my circle—our challenges, conflicts, fears, quirks, obsessions with the ironic, the expectations people had for us.  And I wanted it to take place in and around Detroit.

Over the next two years, I did write it. Like most comedies of manners, The Narcissism of Small Differences takes place within a particular social stratum. It’s the world of Joe and Ana, a Gen X “creative class” couple who live in the Detroit area just as the city is bottoming out at the end of the Aughts. Their friends are much like them—musicians, artists, writers, people who do something creative either as a living or as a “side hustle.” (A common phrase for Detroit artists.)

These types of folks are frequently fictionalized, but mostly in settings that people think of as hotbeds of artistic endeavor like Brooklyn or Los Angeles or San Francisco. Life as a creative in a working-class factory town like Detroit is different. Here we are taught from birth that no one owes you a living. You have to work. My parents were fine with me being a writer, but they never let me forget, “You gotta make a living.”

One of the strangest things to get used to was that Detroiters were no longer a late-night talk show punch line.

So, The Narcissism of Small Differences became a lot about work and how even creative Detroiters have a factory town work ethic. It was also about the compromises we make to earn that living, and the people we sometimes become as a result of those compromises.

I had innocently thought that publishers would want this comedy of manners about a long-unmarried, childless creative couple and their friends living and surviving in the Detroit area. Okay, maybe it had slipped my mind that most of America considered Detroit a joke, a tragedy, a crumbling necropolis of abandoned buildings, populated by people who stayed because they didn’t have enough sense to leave.

Guess what?  No one wanted the book. Oh, how they didn’t want it. Editors praised it, but they did not want it. They said the book was “fascinating and complex,” “witty and full of dark humor,” that it possessed a “deep intelligence and empathy about the Midwest and Detroit.” Those are actual quotes from editors, what my then-agent used to call “nice noes.”

Nice or not, they were still noes. After we ran out of places to submit, there wasn’t any choice but to put the book away. It was the thing that no novelist wants: the orphaned book in the drawer. It was a virtual drawer, mind you, but still dark and unopened. I left it there but did not forget about it.

Ten years passed. During that time, the unthinkable happened. Detroit started to come back. It became the New York Times mascot city. (They wrote about Detroit all the time. We just kept thinking: what the fuck is going on?) Industries and investors started to return, millennials wanted to live in cities again, “start-ups” and “tech hives” became phrases Detroiters heard repeatedly. It must be mentioned that the city still had no shortage of serious, even dire problems, but things definitely felt like they were changing.

One of the bellwethers of that change was Anthony Bourdain. Out of the many gifts Bourdain gave to the world, he gave one specifically to Detroit, when he visited here and was quoted as saying, “I’d love to be able to say that I came from Detroit. That would be like the coolest thing I could ever say.”

We carried that around in a special little pocket of our hearts and still do. Bourdain loved Detroit. He praised the people, the resilience, the sense of humor, the lack of bullshit and pretense. He got Detroit. He thought the place was special, even beautiful, despite the scars, despite the ruins, despite the pains of our checkered history. “Detroit looks like motherfucking Detroit. As it should,” he said. We couldn’t have loved him more for that.

Something was definitely happening. Without our knowledge, it seemed Detroit’s identity was being “retooled.” (Another phrase from the local lexicon.) One of the strangest things to get used to was that we were no longer a late-night talk show punch line, shorthand for washed-up, flyover industrial wasteland. The national conversation about Detroit had changed.

The media, in its capricious way, had decided that Detroit was no longer the blighted shame of America, but its new Comeback Kid. It was all bullshit, of course. Some things had changed, but there was and is still a long way to go. Yet there’s undoubtedly more hope and positivity around here than there has been for a long time. What I personally didn’t realize was that when the story changed about Detroit, so would people’s feelings about The Narcissism of Small Differences.

What may have seemed wrong or even ridiculous ten years ago, like say, a comedy of manners that takes place in Detroit, now makes a strange kind of sense.

During that ten-year period, I was still writing about Detroit, but I sure as hell wasn’t the only one. So many amazing Detroit books came out during that time: Once in a Great City by David Maraness, Herb Boyd’s Black Detroit, Mark Binelli’s Detroit City is the Place to Be, Desiree Cooper’s Know the Mother, Lolita Hernandez’s Making Callaloo in Detroit, Say Nice Things About Detroit by Scott Lasser, Marge Piercy’s Made in Detroit, I Got to Keep Moving by Bill Harris, Detroit Rock City by Steve Miller, August Snow by Stephen Mack Jones, Motor City Burning by Bill Morris, just to name a very few.

I published a story collection, The Lost Tiki Palaces of Detroit, and a novel called Beautiful Music, a musical bildungsroman about a teenage boy growing up in the turbulent years after Detroit’s 1967 uprising.

Meanwhile, the novel I had written ten years earlier was still in its drawer. When I pulled it out one day and re-read it, I knew only one thing: I didn’t want to update it.  I saw now that I had a period piece. I realized that Detroit in the late Aughts was a great setting. The collapse of the auto industry was looming.  The city was in financial chaos, literally falling apart, but even then, there were glimmers of what was to come, a new identity not yet revealed, just like for the characters in the book. The city itself was an important character, strongly influencing and impacting its inhabitants.

When Ibrahim Ahmad, my editor at Akashic, heard about the book, he was curious. He knew its history, but he also knew that often novels get rejected for reasons that have nothing to do with the quality of the writing. Sometimes they get rejected because the world just needs to catch up to them a little.

What may have seemed wrong or even ridiculous ten years ago, like say, a comedy of manners that takes place in Detroit, now makes a strange kind of sense. Especially since that city is now perceived in a much different way than it was ten years earlier.

When Akashic accepted The Narcissism of Small Differences for publication, I was thrilled. I realized that the book worked much better as a period piece, whether I had meant it that way or not. It worked because I had actually written it during the period.

Whatever the case, I felt vindicated, the way Detroiters felt when Bourdain said that he wished that he was one of us.  It made us realize that we had known the truth all along. That Detroit is a special place, a creative place, our place. That was why we stayed. And why we continue to stay. 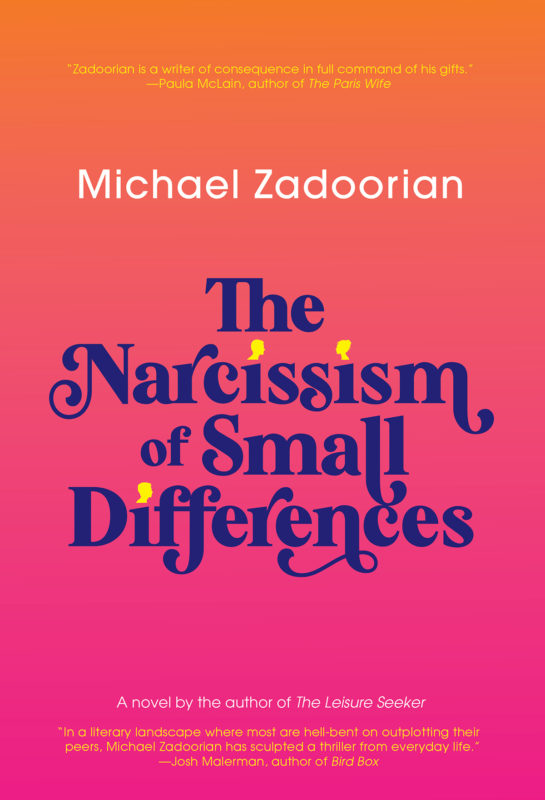 Michael Zadoorian’s novel The Narcissism of Small Differences is available from Akashic Books.