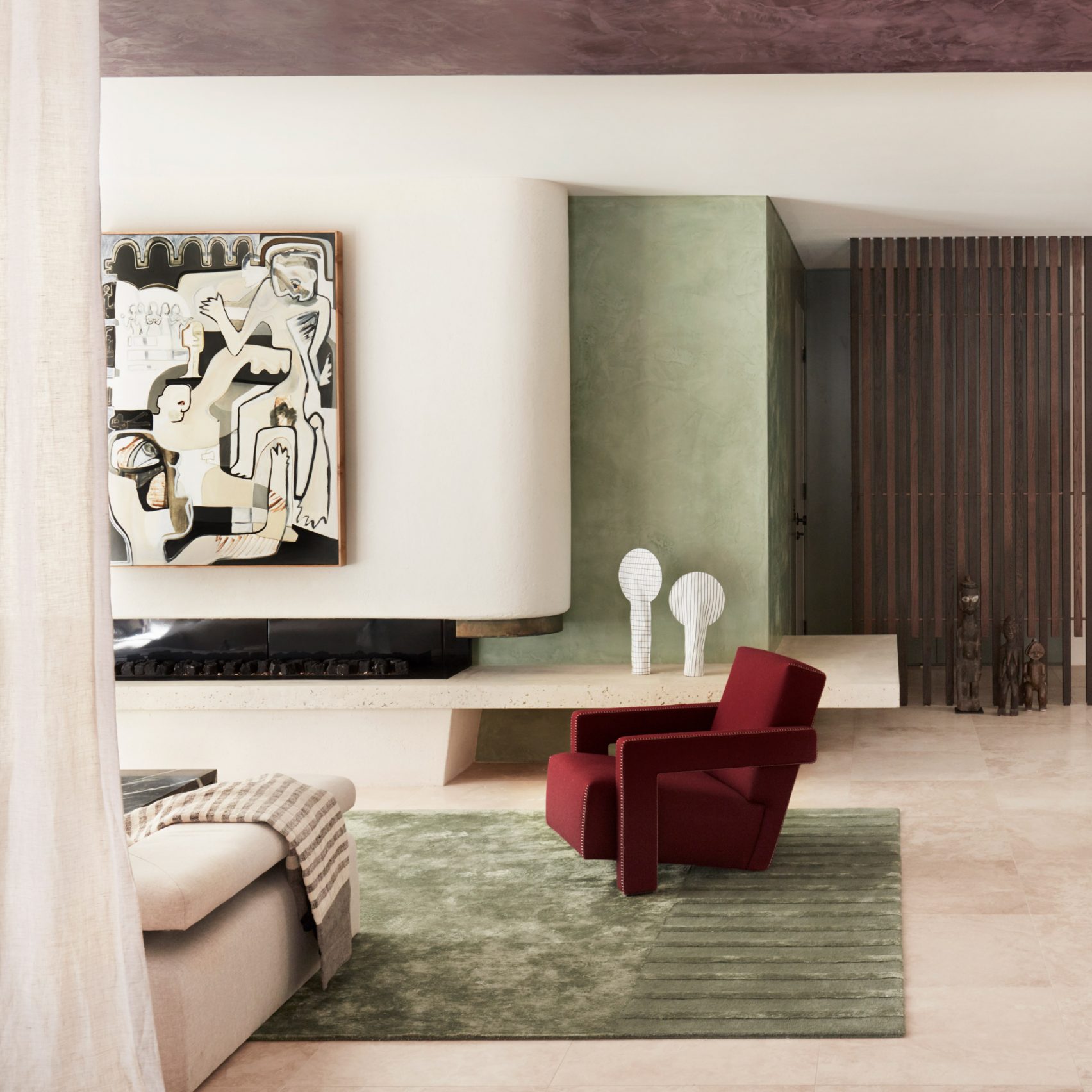 A fashion editor's apartment in São Paulo and a home covered in panels of mint-green metal mesh feature in our latest lookbook, which rounds up ten lounge interiors where green is used both as a background colour and a striking design statement.

Whether sage, emerald or khaki, green goes with both cool and warm colours, which allows it to be used much like a traditional neutral.

As such, it can be used to inject colour into an otherwise monochrome interior without being overbearing, or contrasted against rich reds, pinks and purples to delineate different areas in an open-plan living space.

This is the latest in our lookbook series, which provides visual inspiration from Dezeen's archive. For more inspiration see previous lookbooks showcasing living rooms with floor-to-ceiling glazing, wood-clad kitchens and space-saving kids' rooms with bunk beds.

The room forms part of a renovated 1980s apartment in a former parking garage, where dated popcorn ceilings and beige carpets were replaced with a rich mix of materials including a quartzite fireplace and walnut hardwood flooring.

Find out more about St Lawrence ›

Pale green walls act as the backdrop to an eclectic assortment of furnishings in this Athens guesthouse by designer Stamos Michael, where modern classics such as Konstantin Grcic's Traffic lounge chair are mixed with a number of pieces by Greek designers including Michael himself.

Among them is a hand-painted pine and plywood storage cabinet, a lamp hidden in rust-brown columns of powder-coated steel and a stool made from two blocks of stone that Michael found in a quarry on the island of Tinos.

Find out more about Esperinos ›

Set in the town of Sleepy Hollow in the Hudson River Valley, this family home features not just a traditional living room but also a cosy den finished in glossy army-green paint.

Designer Jeanne Schultz adapted a sensitive colour strategy when renovating this home on Barcelona's historic Passeig de Grácia in order to enhance, rather than overwhelm, existing period features such as the Catalan vault ceiling and wooden parquet flooring.

In the lounge, she drew attention to the chequered green tiles that frame the pink stone fireplace by painting the doors, window frames and ceiling mouldings in a matching hue.

Find out more about the Passeig de Grácia apartment ›

When renovating this apartment in one of Greece's polykatoikia residential blocks from the 1980s, architecture studio Point Supreme Architects tore down many of the internal walls and instead used colourful built-in furniture pieces to demarcate different zones.

The open-plan living and dining area is traversed by a storage wall made from green-stained plywood, while the kitchen is fitted with light pink cabinetry and bright blue wardrobes line the hallway next to the two bedrooms.

Find out more about Trikoupi Apartment ›

Budge Over Dover, Australia, by YSG

Interior design studio YSG created living spaces across two different levels inside this renovated home in Sydney. The first sits perched on a vast platform made from terracotta tiles to align it with the garden patio.

This creates a second "sunken" lounge area at the rear, in which a sage-green wall and matching velvet rug are contrasted against a maroon-coloured Utrecht armchair, designed by the late Dutch architect Gerrit Rietveld for Cassina in 1935.

Find out more about Budge Over Dover ›

Portuguese architecture practice Ottotto used panels of mint-green metal mesh to obscure the original stone walls of this house in Porto while preserving a "memory" of the former building.

A darker shade of green was also used to finish the home's new steel structure, which holds up three separate volumes interspersed by strategic lightwells to funnel sun into the living spaces on the ground floor.

Find out more about GreenHouse ›

To tie the apartment's interior together, Brazilian designer Julliana Camargo also incorporated other shades of green into the kitchen, from jade drawer faces and wall tiles to minty cabinets.

Vertical cedar boards panel both the interior and exterior walls of this Oregon holiday home, separated by vast double-height windows to create the impression that the two exist as one continuous surface.

In the living room, local studio Hacker Architects stained the wood in a subtle smokey green hue that references the colour of native plants found in the volcanic landscape outside.

Sage-green plaster helps to give subtle texture to the lounge of this three-storey townhouse in London's Highgate, designed by local studio House of Grey.

Find out more about Highgate House ›